Snug and Smug with Solar Power: Keeping on the Sunny Side of Storms

Hidden in the Hollows: My Frack-finding Weekend in West Virginia 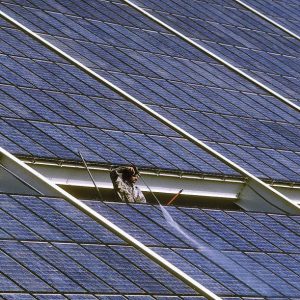 The cost of installing and connecting photovoltaic panels has dropped roughly 30 percent since 1998, according to the Solar Energy Industries Association. A 30 percent federal tax credit applies until 2016. (Dave Harp)

“Snug and Smug with Solar Power:  Keeping on the Sunny Side of Storms” was distributed by Bay Journal News Service, March 2013.

“Snug and Smug with Solar Power: Keeping on the Sunny Side of Storms” was published in Bay Journal News Service, March 2013.

All around, millions of people are losing electric power as trees and other inappropriate objects crash down on power lines. It doesn’t matter anymore what storm it is. At least three recent storms of apocalyptic dimensions have slammed into the East Coast, and more record-breaking ferocity is being predicted. Traffic lights don’t work. Stores can’t process credit/debit cards. Gas stations can’t pump gas. Roads are blocked and relief supplies can’t get through. Favorite TV reality shows go unwatched as the real world intrudes.

But we don’t miss a show, the husband and I, although in actual fact we usually watch old movies on DVDs as storms thump outside. During the searing heat after last June’s notorious wind that caused power outages for weeks, we sat in the breeze of our little fan. During the various winter blizzards that loaded lines with snow and ice, we sat in the warmth of our gas furnace. Not even Superstorm Sandy turned off our television.”