On Not Encountering an Eastern Panther

The Appalachian Forest: A Search for Roots and Renewal

To Love a Place: Cross Mountain 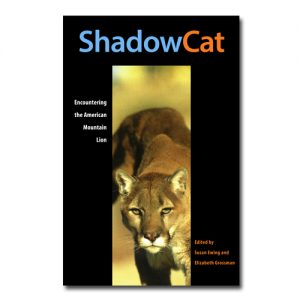 “On Not Encountering an Eastern Panther” is an essay that appeared in Shadow Cat: Encountering the American Mountain Lion, Edited by Susan Ewing and Elizabeth Grossman, Sasquatch Books, 1999

“Sometimes it seems that I am the only person I know who hasn’t seen a panther in the mountains of western Virginia, where I live. Reports come in from all sides. Lori saw a black one playing at the foot of Little North Mountain not far from here, but she is a poet and a writer of fantasy novels, and sees things in the shadows that other people don’t. My neighbor Willy was startled the other night by a big, long-tailed cat that ran in front of his car; he is a hunter and said he never saw anything like it in the woods, but it was night and he barely got a glimpse as the animal streaked by. David saw one on the outskirts of a small city down in the valley where he lives, but is is sadly, too often…”

“Overall … this anthology, which also presents pieces by Terry Tempest Williams, David Quammen and Chris Bolgiano, among others, brings fresh material to what the editors call the “debate over wildness and wilderness,” and provides a wealth of information on the cat that once roamed from Canada to South America.”
–Publishers Weekly