A Bend in the River

Clean may not always be green where Wind Power is concerned 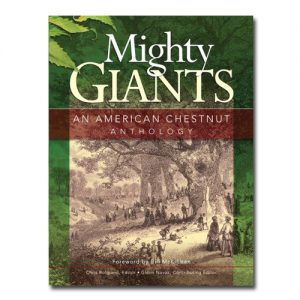 Published by Images from the Past and sponsored by The American Chestnut Foundation, Asheville, NC, 2007.

Mighty Giants: An American Chestnut Anthology tells in images and words the story of the once mightiest tree in the eastern forest.  Ghost writing an essay for President Jimmy Carter in this book was a highlight of my career.

“Editor Bolgiano gathers photographs, essays, poems, and personal recollections into a fascinating cornucopia of all things chestnut. … Images of the big trees evoke an aching sense of what’s lost, while stories of those trying to save them are cause for hope and admiration … highly recommended, even for those libraries outside the chestnut belt.”
— Robert Eagan,
Library Journal, 2008.

“Sponsored by The American Chestnut Foundation, this book will serve its readers well … Includes biological descriptions, historical encounters, oral histories from chestnut lovers spanning centuries, accounts of the arrival of the chestnut blight, and efforts to date at returning this tree to its established place of prominence.
— Lori Enth,
The Bloomsbury Review, 2008.